The ERICarts Institute is investigating the development of a diversified and dynamic "creative sector" based on partnerships between creators, private sector investors, public arts institutions, NGOs and policy makers. Sometimes they form "creative clusters" which increasingly reach beyond national borders.

For the purposes of some of its studies, the ERICarts Institute has defined the "culture industries" as all private businesses and independent contractors operating in the different fields of the culture and media sectors.   In this definition, self-employed artists and independent media professionals are just as much a part of the culture industries as are small, medium-sized and large companies. This approach contrasts with concepts of   "creative industries" which, in most cases, do not go far enough to distinguish between the roles and responsibilities of public and private actors in the cultural sphere. However, in recent studies, the ERICarts Institute has promoted a holistic perspective of the "creative sector", which would additionally include non-profit and informal activities or initiatives.

The above definition of "culture industries" does not advocate a laissez-faire market approach to culture but calls on all public and private actors to support the development of the culture industries in ways which encourage artistic creativity and build (or in some cases re-build) a sustainable and diversified European cultural space of people, ideas and innovations.

Studies produced by the ERICarts Institute have investigated different kinds of public policy instruments and measures to support both the "supply" and "demand" side of the cultural value chain including direct production subsidies to film production companies, public purchases of works of art or granting low interest or risk capital for SME's working in the culture industries.   Such measures are important to make up for "market deficits" and are especially important in those European countries which have very small markets and/or a high concentration of foreign companies and products saturating local markets.

Voices from the field are collected to understand the interaction between the real life working practices of artists or media professionals and the experiences they have operating within the marketplace as well as within the legal and economic environments which regulate their work or facilitate their mobility.

Over the past decade, the ERICarts Institute has frequently been involved in conferences, workshops and hearings addressing perspectives of the "Creative Sector" (often - and irritatingly - being labelled as "Cultural and Creative Industries"). More recently, ERICarts Executive Director Andreas Wiesand was asked by the ALDE Group (Alliance of Liberals and Democrats for Europe) to speak about this topic in Brussels at the Committee of Regions during the 9th "European Week of Regions and Cities" (11. October 2011), as well as by Fondazione Rosselli and the S&D Group (Socialists & Democrats) at a joint conference held in the European Parliament (22. November 2011) and by the EU-China Trade Project at a Workshop on CI development and the UNESCO Convention in Hefei/China (26/27 April 2012). His November presentation in Brussels can be downloaded here.

For Wiesand, this was not really a new issue: His first encounters with the subject date back to 1972, when he and Karla Fohrbeck published the "Authors' Report" (Der Autorenreport); together with Michael Söndermann, he was also the main editor of the "1st Culture Industries Report" in Germany, 20 years ago (download English Summary). This could explain why he now tries to damp down a bit the current high-flying expectations of politicians or consultants on both the European and national levels, some of which see the creative industries as a kind of magic bullet in strategies to counteract the economic crisis and to raise employment. His advice in Brussels: "Beware of unrealistic growth fantasies!"
Of course, there are stil a few "islands" in Europe where such CI growth - even as regards regular employment - can be registered, despite the general economic downturn since 2009. One of these examples appears to be Germany, but Wiesand warns against overgeneralisations, since the conditions in Germany are quite exceptional, at present: A robust economy with the largest consumer market in Europe, fuelled by rising salaries and export revenues. In his view, CI development efforts should start on a local or regional level, since this will better reflect specific strengths or traditional profiles and will, at the same time, help to secure what is crucial for European societies and economies: cultural diversity. 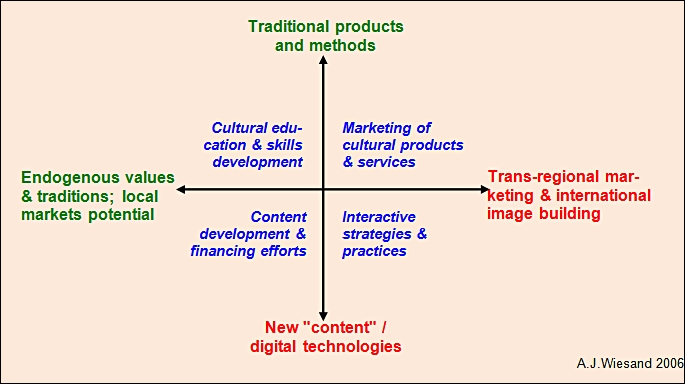